It is written at the end of the book Sharh-i Mawaqif by Sayyid ‎Sherif al-Jurjani that, according to the scholars of Kalam, a ‎person to whom Allahu ta’ala says,

“I have sent thee to the ‎people in such and such a country or to the whole of mankind,” ‎or “Reveal [My will] to my slaves!” or gives a similar command, ‎is called a “nabi” or “payghambar” (Messenger or Prophet). ‎Being a Prophet does not require having certain conditions like ‎riyada or mujahada or having been born with qualities suitable ‎for prophethood.” 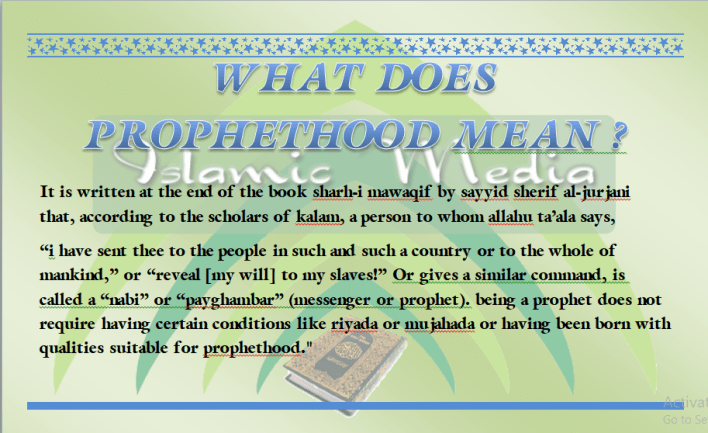 Allahu ta’ala can bestow this gift upon ‎anyone He chooses. He knows everything and does what is ‎best. He does whatever He wills to do. He is the Almighty. ‎According to the scholars of Kalam, it is not necessary for a ‎Prophet to display a mu’jiza (miracle), either. It was said that he ‎had to display miracles so that people would know that he was ‎a Prophet, but this still is not a condition for him to be a ‎Prophet. According to ancient Greek philosophers, to be a ‎Prophet requires three conditions; firstly, to reveal the ghaib ‎‎(unknown, mystery), that is, to explain past and future events ‎when required; secondly, to do extraordinary things, that is, ‎things that are mentally and scientifically impossible; thirdly, to ‎see an angel in object and body and to hear Allahu ta’ala’s ‎wahy from the angel. Neither for us nor for them ‎‎[philosophers], is it necessary for a Prophet to know the entire ‎unknown‎ (ghaib) .

And knowing some of it is not peculiar only to ‎Prophets. It is admitted also by philosophers that those who ‎undergo riyada, that is, those who isolate themselves in a room ‎and eat just enough so as not to die, some sick people who ‎have lost consciousness, and some people while asleep ‎disclose some mysteries. In this respect such people are not ‎different from Prophets. Perhaps, what philosophers call the ‎‎“ghaib (to know the entire unknown )” are the extraordinary and unusual things which are ‎rarely seen. However, these are not the real unknown (ghaib). ‎Knowing them –‎“ghaib (to know the entire ‎unknown)”- or reporting them once or twice does not mean ‎to transcend the ordinary. This point keeps Prophets and ‎others distinct.

Scholars of Kalam also report that Prophets will know the real myteries ‎revealed to them by Allahu ta’ala, but they say that knowing ‎mysteries is not a requirement for being a Prophet. Also, the ‎abovesaid grounds which philosophers put forward with ‎respect to knowing the unknown are not correct. They are ‎incompatible with Islam’s fundamentals. Furthermore, ‎knowing the unknown on such grounds is quite a different ‎subject. They are extraordinary wonders. There is no use in ‎particularly dwelling on this.‎

Extraordinary events, such as, affecting objects and ‎substances as one wishes; effecting the wind, earthquakes ‎and fires when one likes or a ship’s sinking; a man’s dying or a ‎tyrant’s going to his doom upon one’s wish are the human ‎soul’s influence on matter. In fact Allahu ta’ala, alone, is the ‎One who affects matter. Allahu ta’ala creates this effect on ‎whomever He wills, whenever He wills. For this reason, it ‎cannot be said that extraordinary things or wonders are ‎peculiar to Prophets only. This is admitted by philosophers, ‎too. Therefore, how could this ever be the distinction ‎between Prophets and others?‎

Although ancient Greek philosophers said that wonders could ‎also happen through non-prophets, they did not accept the ‎frequency or the degree of wonders reaching the capacity of ‎i’jaz (miracle). They said that because such extraordinary ‎things happen through Prophets a Prophet is distinguishable ‎from others.‎

Philosophers’ stating that an angel manifesting itself to ‎Prophets and revealing Allahu ta’ala’s wahy as a condition for ‎prophethood contradicts their own philosophy. Their saying ‎such things are intended to mislead holders of iman, for, ‎according to them, angels are immaterial and speechless. To ‎produce sounds requires being material, they say. Sound is ‎produced through waves of air. We can say that these ‎conditions put forward by philosophers might come to mean ‎that angels can show themselves and talk by taking material ‎form.‎ 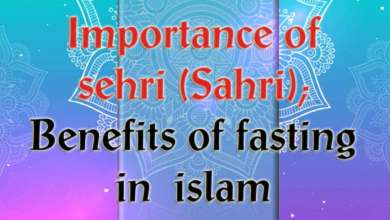 importance of sehri (Sahri); Benefits of fasting in islam 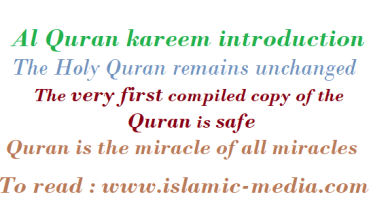 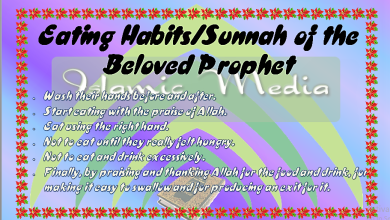 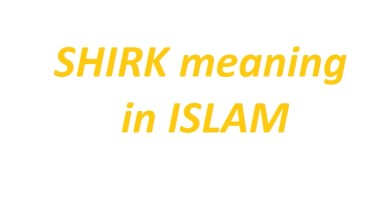