BI’THAT: THE SENDING OF PROPHETS AND ITS NECESSITY

Man is aware of nothing at the time of his creation. The creation around him, however, is so vast that only Allah ta’ala knows its extent. This is reported in the thirty-first ayat of Surat al-Muddaththir.

A child begins to perceive classes of beings through its sense organs. Each class of beings is termed an ’alam. “The sense organ created first in man is the tactile organ; with the ability of touch, man perceives cold, hot, wet, dry, soft, hard, and the like. The tactile organ cannot perceive colors‎ or sounds, and these are thought to be nonexistent. Then his organ of sight is created, and with it colors‎ and shapes are perceived. The world perceived by this organ has more variety and more numerous beings than the tactile world. Next his auditory organ functions. With this sense organ sounds and tunes are perceived. Afterwards, his ability to taste and then his ability to smell are created. Thus the five senses which reflect the world of perception are completed.

Towards the seventh year of life, his power of discretion (tamyiz) is created by which things that cannot be comprehended through the sense organs are realized. This power differentiates things that are perceived by the sense organs from one another. Then his intellect or wisdom is created. What is useful, harmful, good or bad is ascertained by the power of discretion; wisdom distinguishes the neccessary, permissible, possible or impossible from one another. Wisdom comprehends things that cannot be grasped by the powers of perception and discretion. Besides wisdom, Allah ta’ala creates one more power in some of His chosen slaves. With this, things that cannot be understood or learnt thru wisdom and things that will happen in the future are known. This is called the power of prophethood (nubuwwa). Because the power of discretion cannot comprehend the things within the cognitive area of wisdom, it is oblivious to them. And because wisdom cannot understand the things comprehended by the power of Prophethood, it disbelieves, and denies them. Denial of what cannot be comprehended is the result of not comprehending, not knowing. Likewise, a person born blind will know nothing of colors‎ or shapes if he does not hear about them. He will not believe in their existence. To reveal to His slaves that the power of nubuwwa also exists, Allah ta’ala created dreams in men similar to this power. In dreams, man might see what will happen in the future clearly or in its vision in the alam-i mithal. If a person who does not know what dreams are is told,

“When man’s consciousness is suspended and thoughts and senses are gone like that of a dead person, he sees unknown things that are beyond mind’s grasp,”

He will deny it. He will even attempt to prove that such a thing is impossible, saying,

“Man perceives his surroundings by his sense organs. With these organs suspended, especially when they do not function at all, he will perceive nothing.” 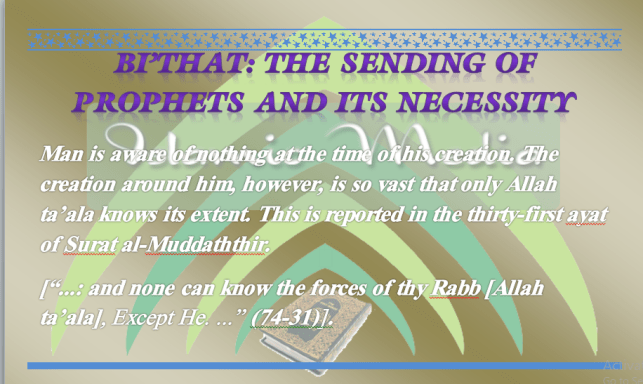 Those who doubt the existence of the power of Prophethood doubt its possibility or, if its possibility is accepted, its occurrence. Its existence or occurrence shows that it is possible. And its existence is demonstrated by Prophets’ giving information beyond the intellect’s ability. This information, which cannot be acquired through the intellect, calculation or experimentation, was acquired only from Allah ta’ala’s ilham (inspiration placed upon the heart by Allah ta’ala or His angels, that is, through the power of Prophethood). The power of Prophethood has also other peculiarities. Since dreams, which resemble one of its peculiarities, exist in men, we have given it as an example. Its other peculiarities are revealed through dhawq (tasting, sensitivity) to those who strive on a path of Tasawwuf. The peculiarity we have given must suffice as a proof to make one believe in Prophethood. Imam Muhammad al-Ghazali, too, wrote this peculiarity as a proof for believing in Prophethood in his book Al-munqidh min ad-dalal.

According to ancient Greek philosophers, it is useful to believe in Prophethood. They said, “To believe in Prophethood helps wisdom. Meditating over the existence, power and knowledge of Allah is similar to this. Also, many useful things beyond the intellect’s ability are learned from Prophets. Examples of this are the Rising Day, teachings pertaining to the next world, revelation of what things are good and what others are bad, and knowing whether some foods and medicines are harmful or not.” 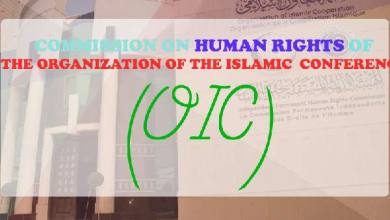 The Organization of the Islamic Conference (OIC)